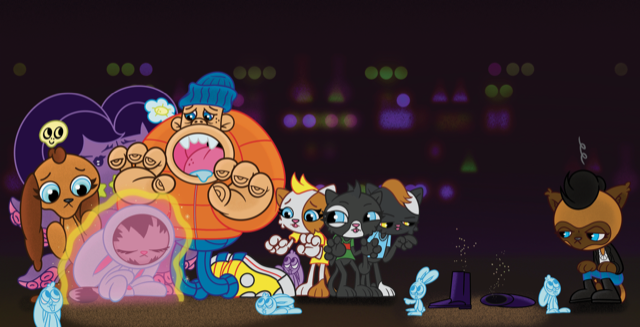 November 22, 2022 – With BunnyKitty in the City, the sequel The Origins of BunnyKitty (2016), legendary graffiti artist David “Persue” Ross (@persueone) aims to bring BunnyKitty into the digital world and connect with fans in a new way. Teaming up with Notables – an NFT ecosystem that works with influential individuals and cultural icons to build unique, utility-based digital asset collections – BunnyKitty enters Web3 with a collection of 8,080 BunnyKitty digital assets which will enable collectors to participate in character development and world-building. The physical book itself, released on Friday November 11, comes in a special artist edition, with 700 copies available for purchase at BunnyKitty.com, each signed and numbered by the artist. With the release of BunnyKitty in the City and its accompanying NFT collection, the BunnyKitty universe is rapidly expanding, drawing fans into the magical world with both physical and digital elements. Additional details and imagery will be released closer to its official launch of the digital asset early December 2022.

In 2001, well-known graffiti artist Dave Persue inserted a cutesy character amidst his abstract letterforms, forever changing the trajectory of his career. While his graffiti propelled him forward into the world of skateboarding and aesthetics, eventually helping him pioneer the marketing space for artists and shape some of the most iconic streetwear brands, including DC, Circa, and Osiris, that character took on a life of her own.

BunnyKitty was born on a wall, but now she lives on the page, first in The Origins of BunnyKitty (2016), which was a collaboration between Persue and his mother, and now in her latest adventure, BunnyKitty in the City. This sequel sees the titular character arriving in the city in search of her family, sending her on the ultimate journey of self-discovery. The beloved cat in a bunny suit demonstrates the classic pursuit of good over evil, giving readers a chance to see BunnyKitty as Persue has always envisioned her. With Notables at the helm of this project, the exploration of this IP within the web3 machine is endless, leaving lots of exciting opportunities with BunnyKitty to come in the future.

Multi-hyphenate San Diego-based artist David “Persue” Ross, is known across fields and mediums for his prowess as a painter, graffiti artist, muralist, author, designer, and curator. Armed with a unique and innate ability to integrate art in all facets of life, Persue (pronounced per-SWAY) established himself as an undeniable pioneer in the west coast aerosol art and skateboarding industries. His portfolio predates almost any example of street aesthetics being paired with the skateboarding industry, making his earliest designs the catalyst that helped create the look of today’s streetwear aesthetic. His thriving career has yielded several milestone collaborations, his abstract approach known as Liminal Space, his Wet Paint practice, and of course, the BunnyKitty Universe. From walls around the world to picture books, BunnyKitty has taken on a life of her own.

Serving as both a creator’s platform and an online sales platform, Notables is a NFT ecosystem that works with influential individuals and cultural icons to build unique, utility-based digital asset collections. Notables is a full-service blockchain solution for developing and designing NFT projects, building online communities, and returning value to the community long into the future. Its highly-curated platform and ecosystem provide a seamless user experience for both the creator and user. With the unique ability to allow artists to push the boundaries of fan engagement, Notables is designed to deliver unique, one-of-a-kind, digital items aimed at super-fans or consumers who support specific creatives and influencers.